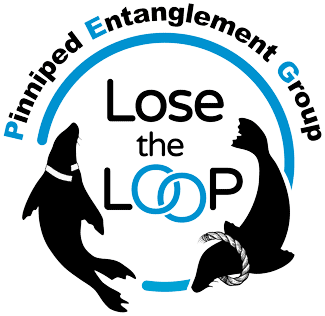 To reduce pinniped entanglements in marine debris and fishing gear.

While conducting Steller sea lion research in Alaska during a 3-week survey in 2000, we saw more than 50 Steller sea lions with life-threatening neck entanglements from fishing gear and marine debris (trash) or swallowed fishing hooks. Unfortunately at the time, there was no safe way to capture and disentangle these large (adult males can weigh up to 2000 pounds) sea lions. At the same time, we were observing many northern fur seals entangled in fishing nets and marine debris in the Pribilof Islands, Alaska. We wanted to do SOMETHING to help these animals and so until safe disentanglement methods were developed, we decided to do our best focusing on PREVENTION of marine debris through outreach and education.

We knew there were others around the world dealing with similar issues. So in 2009, four of us – Lauri Jemison, Kim Raum-Suryan, Kate Savage, and Mike Williams – formed the Pinniped Entanglement Group (PEG) to reduce pinniped entanglements in marine debris and fishing gear worldwide. Through education and outreach, we are working together to PREVENT marine debris and pinniped entanglements.

Prevention is critical. Our ability to disentangle animals is very small compared to the much larger problem of plastics and other marine debris in the oceans that threaten all marine life.

Over the years, PEG has grown into a global community, and we currently have more than 151 members in 18 countries, all dedicated to the safety and welfare of pinnipeds. Our activities include entanglement prevention, outreach, and education, sharing of disentanglement tools and techniques, and using the latest entanglement response practices to safely rescue and release entangled seals and sea lions.

There have been many advances in pinniped entanglement response in the last several years. Most notably, remote sedation now allows responders to safely capture and disentangle large pinnipeds that previously were inaccessible. However, it is essential to work collectively to find solutions to prevent marine debris from entering our waterways. By working together on global outreach and prevention, we can help to mitigate the impacts of marine debris on pinnipeds and all marine species. PREVENTION is the key to solving this global problem. You too can help!

To learn more about some of our PEG members and their efforts to help seals and sea lions, please click on the links below.

Alaska Department of Fish and Game

Allied Whale, College of the Atlantic

Click on a location or on the map to see photos of some of the teams!

Back to top
Page load link